Skalar’s Automated Kelada In line distillation and digestion for Cyanides

According to EPA Method Kelada: for the analysis of Total, Weak Acid Dissociable, Cyanide Amenable to Chlorination, and Free Cyanides in Drinking, Waste and Surface Waters

Many laboratories on a daily basis analyze many samples for the presence of various forms of cyanide. Most of these samples do require manual distillation and/or digestion of the sample prior to a standard colorimetric detection in order to remove the presence of known interferences. The manual distillation process is very cumbersome and very time consuming along with creating excess waste in the laboratory. Today's laboratory is increasingly short on time and analysts creating a bottleneck effect with regards to sample throughput on this much needed analysis. 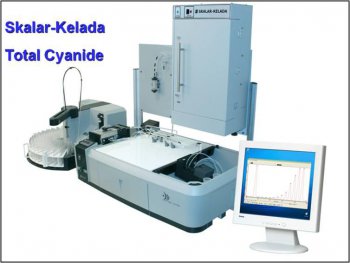 In response to this demand, Skalar with Dr. Nabih Kelada designed a system for this analysis. Dr. Kelada is a retired chemist from the Metropolitan Water Reclamation District of Greater Chicago where he did most of his research while running the District's various samples that came into the laboratory.

The main advantage to this method of analysis, that all of our customers have found as a huge benefit, is that the sample turn around occurs in one day. With the manual method, which takes 2 or more hours, operators in many cases were not finding out that their quality controls had failed until later in the day and would now have to do the manual distillation again the next day. With the Kelada system, if there was a quality control failure, the analyst can make corrective actions and still manage to gather the data that same day, not to mention a reduction in chemical usage and waste. Generally speaking because this is a closed system there is no loss of sample preventing erroneous results.

Furthermore, all of these labs have managed to reduce the amount of overtime hours by integrating the Kelada system on their current Skalar system and will see a very quick return on their investment. Also with the Skalar-Kelada method the system can offer multiple species of cyanide with little to no changeover on one system. The Skalar-Kelada system can also be set up with many other analytes as the system is designed to do up to three other parameters.

One of our first users Pennsylvania's Department of Environmental Protection in Harrisburg has benefitted greatly by the upgrade to the Kelada methodology. They have seen a decrease in man hours and have also been able to improve their detection limits as well giving them more analysis options and reaching out to other clients that they may not have been able to provide a service to before.

Westchester County Environmental Laboratory in Valhalla, New York has also seen a huge benefit in upgrading their current Skalar cyanide analysis to the Kelada system methodology. They have experienced better recoveries on difficult matrices giving them a better picture of the actual value. Also they have greatly decreased their man hours dedicated to the distillation and digestion procedure also decreasing their turn-around times. They are reporting to us that by upgrading to our system annually they can save almost $10,000 in consumable and man hours each year using the Kelada system. The lab supervisor also mentioned to us that with their old method they were restricted in a day to only doing 24 samples per day and now with the new system there is not a limit.